As a virtuoso of the Highland Bagpipe, and celebrated by Indie rockers as “the Eddie Van Halen of the bagpipes,” Matthew Welch studied traditional Highland Bagpipe music with Gold Medalist masters such as James McIntosh M.B.E., Colin MacLellan, Mike Cusack, Jack Lee, Pipe Major Angus MacLellan, Andrew Wright and celebrated, repeat World-Champion Pipe Majors Terry Lee and Iain McLellan B.E.M. Mr. Welch was a member of one of the most internationally premier bagpipe bands of the last two decades: the six – time World Champion Simon Fraser University Pipe Band, and played with the band for their World Pipe Band Championship wins of 1999 and 2001 in Glasgow. As Musical Director for the New York Metro Pipe Band, his unique way of teaching pipe music, musical ensemble cohesion and cultivating a bright, rich pipe corps sound helped steer NY Metro to their 2011 and 2012 wins at the World Pipe Band Championships and the North American Pipe Band Championships respectively. He is also in demand as a private bagpipe instructor.

Beyond the traditional use of the bagpipe, Welch has pioneered new techniques and materials in his own works that include the bagpipe and has premiered a number of new compositions written for bagpipes by living composers. As a classically trained composer, he holds degrees in Music Composition from Simon Fraser University (BFA), Wesleyan University (MA), and is now wrapping up his Doctorate in Music Composition at Yale University, having recently finished writing his dissertation in the form of a treatise on the structures of musical composition for the Highland Bagpipe. As a composer of “progressive classical” music, his albums have won him global acclaim, making both of Time Out New York’s classical and non-classical top-ten CD lists for the year 2005, describing him as “a composer possessed of both rich imagination and the skill to bring his fancies to life.” The New York Times claims “Welch’s border-busting music is original and catchy,” and was Matthew was recently listed as one of NPR’s top composers under age 40.

Matthew is available as a piper for hire for any ceremony (weddings, funerals) or for solo recitals 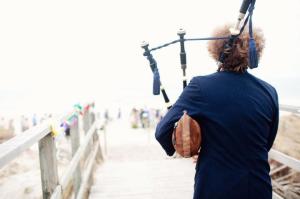